BAFTA, with the support of TCL Mobile, hosted a retrospective on Daniel Craig’s remarkable career in television, theatre and film at ODEON Luxe, Leicester Square last night. In a wide ranging discussion with Edith Bowman, Craig discussed some of his most iconic projects including Layer Cake (2004) and Knives Out (2019) as well as his final appearance as James Bond in the upcoming No Time To Die (2021), directed by Cary Joji Fukunaga.

The celebrated actor also talked about the challenges early on in his career, transitioning from television into film, working with Steven Spielberg and the late Roger Mitchell, the importance of seeing films on the big screen again and his guidance for aspiring actors. 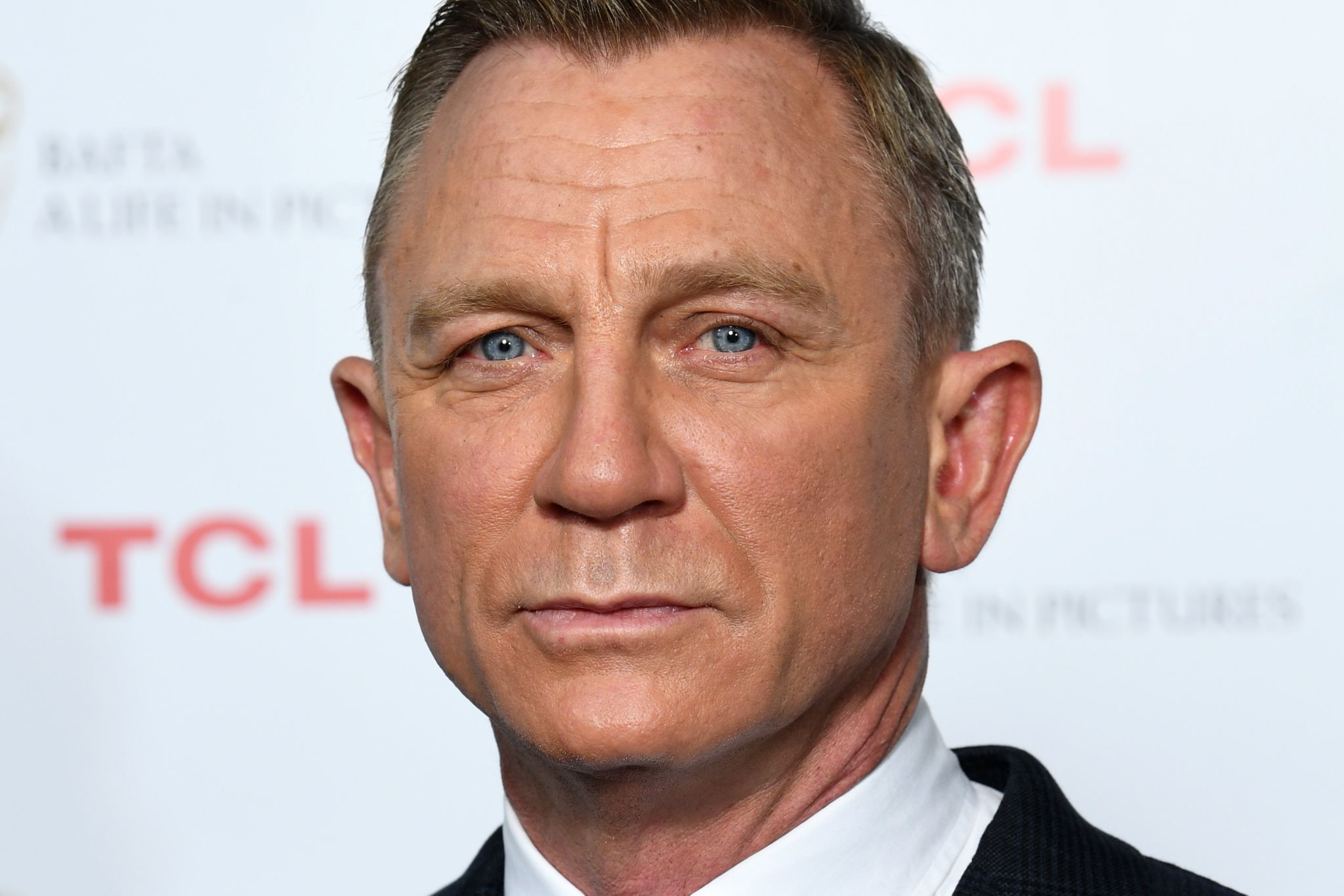 Below is a selection of quotes from the conversation between Daniel Craig (DC) and Edith Bowman (EB).

Craig recalled one of his earliest memories of seeing films and their visual impact:

DC: I lived in a small town on The Wirrall and there was one cinema and it was about–I mean one tiny little cinema, a proper fleapit and all the movies that used to get to us had literally been around the country five times before they got to us. I think I just got into the whole kind of watching uh Blade Runner in this movie theatre and watching and thinking and looking at how the frame had just been jammed with visuals and when I got into movie making, it fascinated me how that plays an important role.

Considering his early projects and how a film like Layer Cake changed his trajectory as an actor, Craig said:

EB: It also felt as well as it being a pivotal moment for British cinema, it felt like it was a real moment for your career in terms of it was a kind of step more into a mainstream arena.

DC: Everybody talks about it being an audition for Bond, so I mean, it’s like… They always want to talk about “oh, you know Layer Cake, it must have been your audition,” and I was like, “believe me, I was the last thing on my mind that was ever gonna play James Bond at that point.” I mean there’s no… It definitely changed, shifted things in a way. People saw me in a different way and “oh, you could be a leading man”. That definitely had an incredibly positive effect on my career, amazingly positive effect on my career.”

Regarding his early work, Craig said:

DC: I don’t watch my old stuff ever. I really try and avoid it if I can.

Craig shares insight on getting into the industry, saying:

DC: I suppose that’s the kind of advice that you give to someone who’s starting off in the industry is ‘just do! Just do it.’

I remember Peter Flannery from Our Friends in the North and he used give writing lessons, and he just went ‘writers write. Just write!’

And it applies to everything, really. You gotta try and just do everything you can. I just had a lot of fortune early on and with the National Youth Theatre, it wasn’t just about acting. And we didn’t think about just acting, it was about this collective effort that we do, and putting on a show, and being with a group of people, and learning discipline like turning up on time so the show went on and things like that.

Daniel Craig on his accents:

EB: But great, but you’re good with accents– South African, you know, Geordie, is that fun? Do you enjoy that side of it?

DC: It takes a lot of work. I really have to work really, really hard to do it. I’m a terrible mimic. I mean, you know, you’re not going to, thankfully, ask me to do impressions, but it’s like—

DC: I know, I mean we could, we’ve got time. It’s just appalling, if you asked me to do an accent like that off the cuff it would just be embarrassing. I have to work really hard and integrate it into it, to learn it as I learn the script and learn it and then it becomes part of me.

Working with the late acclaimed director Roger Michell was an incredible experience for Craig:

DC: Well that’s you know Rog, it’s like you know. First and foremost, you know you didn’t start shooting until the script was absolutely, absolutely right. And then we’d just sit around for a week and we just read it and you know, God bless you know and she was terrified. And I was, you know, we were both kind of terrified in a way it was like, and we just sort of just talked it through and just kind of like–and until we were kind of absolutely at a point where you know, we do it, we’re going to go get on with it now, let’s go.

And you know it was a brilliant, brilliant cast and Hanif, at hi kind of best and yeah, I mean, someone just said to me, you know, like working with Roger was like taking a long warm bath and I think that’s kind of like, you know, it was just–he was just delicious.

On saying yes to Bond, Craig discussed his thought process with Bowman:

EB: And well, listen, we’re going to talk a little bit about James Bond but before we do, I thought it would be nice to remind us all about your journey up to this point.

EB: So good. So when you see all those clips, are you glad you changed your mind?

DC: Yeah, yeah, I mean listen, I don’t know if you’ve seen the documentary, but it’s like they kind of explain all this thing about Spectre about getting injured, which was like kind of not great, but ultimately someone again persuaded me to do it. Barbara Broccoli bullied me and I’m gonna say that right here and I’m so happy I did. I can’t tell you, you know it’s been a weird couple of years and getting to this point, thank goodness we’re here and we can actually get the movie into cinemas and get people to see it ’cause we made it for an audience and it’s like we’re, you know, I’m desperate for people to see it.

EB: When you when you said yes to Barbara after her gentle persuasion—

DC: I mean are you talking about actually doing it in the first place?

EB: Yeah, in the first place. I mean both. Yeah, saying yes to the fifth film, but also saying yes to actually doing it ’cause you said no.

Barbara had already made up her mind. You know, if you know Barbara, that means she’s made up her mind. It was just odd. It was just kind of and genuinely, you know people used to say oh you must have always wanted to be James Bond. I went well, yeah, kind of as a kid I kind of thought about it. I want to be Spiderman as well, but I just thought it was never going to happen. And I never thought it would come on my radar. I just was like, I don’t know, that’s such an awful lot of pressure and God almighty, that’s just going to be such a kind of like a momentous thing. Am I ready? I’m really enjoying what I’m doing. I mean, look, I’m doing Munich, I’ve got such a kind of as far as I’m concerned a really successful and satisfying career going and why would I want to fuck with that? Why would I want to, you know, mess that up by doing this? I don’t know where my brain was at but I have some good friends and they were just like, I mean literally made a list of–

DC: Yeah yeah, pros and cons. And the pros outweighed it. It was one of my closest friends who just said “this doesn’t happen to people, just does not happen.” He said “you’re gonna just regret this for the rest of your life if you don’t do this” and like yeah, sitting in a bar going I could have been Bond. And now it’s just going to be: I was Bond, which is worse!

Again, I kept saying like show me a script, show me a script and I’ll make a decision when I get it… The arrogance of myself. And I was sort of expecting it to turn him in to be kind of like this Bond script and I go, yeah, it’s not really for me. You know, it’s like… but it was Casino Royale and I mean it was just blinding, and when I read the line you know “vodka, martini, shaken or stirred?” “Do I look like I—” and it was written in the script: “Do I look like I give a fuck.” That was the line and you know it was “Do I look like I give a damn” in the movie which works pretty good and as soon as I read that I went oh shit, I mean how can I say no to this? That’s exactly what it was doing, was trying to subvert everything, trying to take it on and reinvent it and that’s what I was given the opportunity to do by Barbara Broccoli and Michael Wilson, was to come in and just try and reinvent it a bit and try and sort of make it fresh again and that’s what we’ve always tried to achieve with it.

Craig remembering his last day on set of the upcoming No Time To Die:

EB: And then when you’re saying goodbye to your cast and crew.

DC: Yeah, I mean it was literally, it was the last shot and you know we were in the right place, we were in a dirty back lot in Pinewood, pretending to be in Cuba. It was pissing with rain. It was like it’s like, yeah, this is the way it goes and anybody will tell you on a movie, you work really, really hard and the last day inevitably is like “see you bye! See you soon we’ll see you.” Everyone wants to get out of there and just kind of just go home. I was gonna, I thought, you know, say goodbye and Barbara came down and then everybody came down, everybody came out the offices and all the heads of department came down, all the riggers came down. I was like oh shit I’m gonna have to make a speech and that’s my nightmare.

And I just started talking and I realized looking around, I just realized I’ve been working with these people, some of them for nearly thirty years ’cause there’s a lot of people I just worked with in the film industry and then you know, just and throughout the Bond movies and it’s always been about the team, it’s just always about the team and you know, Barbara makes an atmosphere on set where we’re a family.

EB: Are there any of the iconic gadgets from the films that really have grabbed you or you really like?

DC: I always loved that box, that I think Sean Connery has. He sort of sticks it, magnetised it to a safe, presses a button, a red light goes on and he opens the door.

I mean, what’s wrong with that? It’s the best thing!

We haven’t had a lot of gadgets in my movies. People always say well where are all the gadgets? But this movie coming out, we’ve got quite a few more. So there’s some good ones.

In response to being asked who should play Bond next, Craig said:

EB: Who do you want to be the next Bond?

You know what, it’s not my problem.